Two Northern Rivers chefs raise over $170,000 and deliver over 200,000 meals to communities cut off by floods. 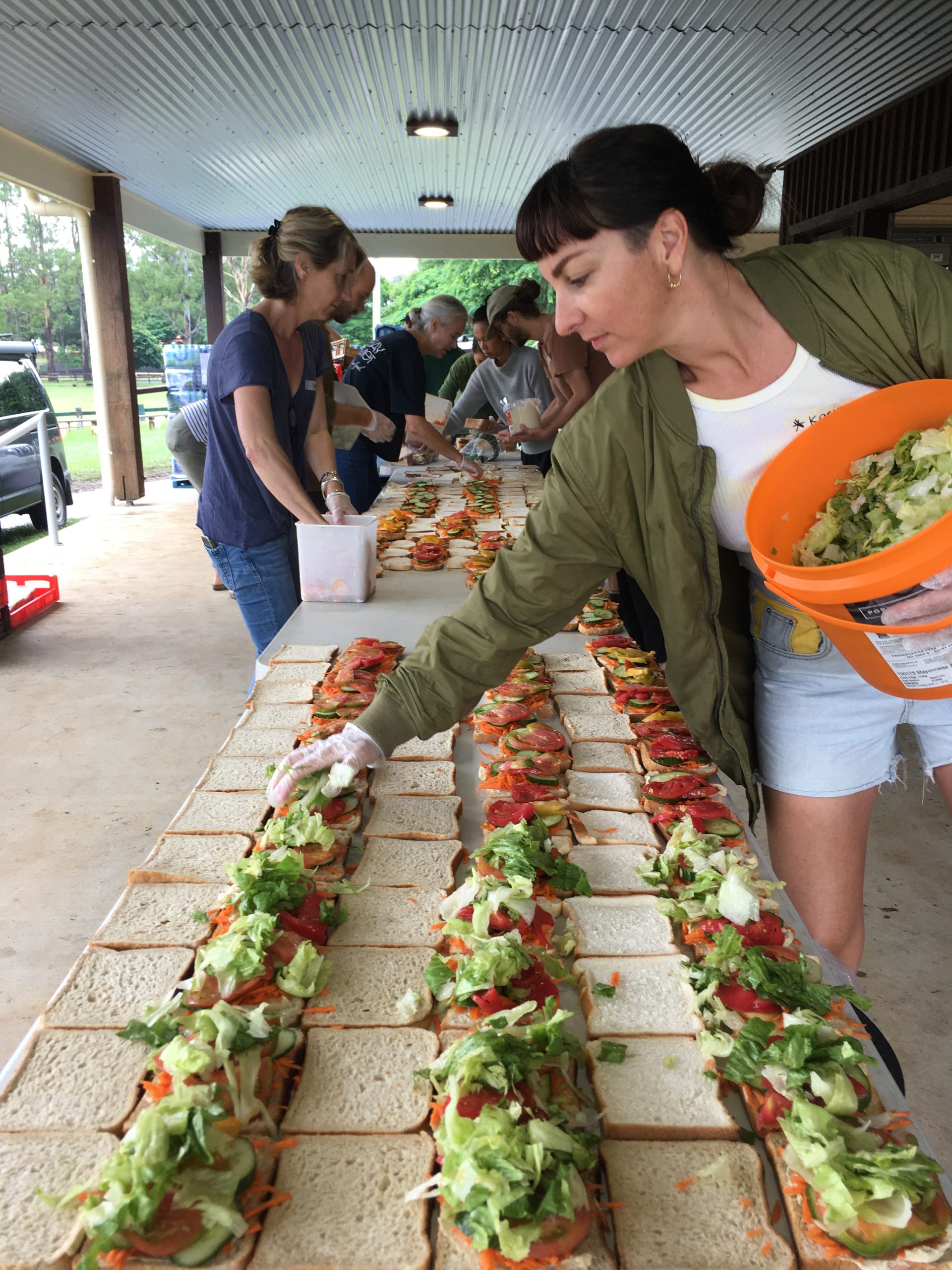 Two Northern Rivers chefs raise over $170,000 and deliver over 200,000 meals to communities cut off by floods.

The Northern Rivers community answered the calls from open fire chef Pip Sumbak of Pip’s Plate and Wal Foster of Natural Ice-cream Australia, and came together to cook and feed those who lost everything from the floods.

Byron was flooding and there were rumours that Lismore was about to breach. Wal, Pip and their friend Josh were preparing for a pop-up dinner at Barrio Eatery & Bar when the news broke. They decided to cook a giant curry instead. The following day, while hand-delivering the 500 meals to Lismore, the duo discovered just how bad the devastation was. They raced back to Byron to empty shops, petrol stations closed (due to flooding on the highway), and gathered all the food they could find before reaching out to chef and producer friends for help. A few people wanted to give cash so they set up a Go Fund Me Page with the target of $500. Within 20 minutes they had $2,000 and within 24 hours, they had raised $20,000.

In a time of crisis people need direction and a small Go Fund Me made a way for ordinary people to funnel their generosity. Overnight this small idea had turned into a full-blown operation, and the duo relocated from the kitchen at Bay Grocer in Byron Bay to the Lion’s Club at Bangalow Moller Pavilion and arranged for a refrigerated shipping container to be delivered. As a group of small business owners with a combined skillset they were able to set up a food hub. All through a message thread which grew day by day with volunteers divided into groups for transport, chefs, producers, sandwich making, and runners.

Soon another team of volunteers at Byron’s Beach Hotel started taking care of the ordering of bulk goods for the restaurants since produce, food and containers were hard to come by. While five days in they still didn’t have phone service, wifi or fuel, and no idea which roads were drive safe – there was a lot of driving for organization. Nearly every restaurant and chef in the Northern Rivers contributed their time and energy to the cause, including Three Blue Ducks, Bread Social, Bay Leaf, Fleet, Eltham Hotel, Paper Daisy, Frida’s Field, Barrio Eatery & Bar, The Diner Lennox, Harvest Newrybar, Salumi Australia, Lightyears and many more.

People were getting snippets of phone signal and through social media discovering that Pip and Wal had hot meals and water ready to go and calling them direct in need of help – many hadn’t eaten in days. Privately funded helicopters, boats, vans, jet skis, and community volunteer leaders got in touch and started distributing food to those stuck in the most remote areas and on the roofs of their houses.

“I’m so proud to call this place home. It’s been over 2 weeks since we mobilised as a community. Most of us small business owners. Wal @naturalicecreamaustralia is an ice cream man (a very good one) and I’m an open fire chef @pipsplate. Without training, we found ourselves leaders of a makeshift emergency response. We called upon our mates… well actually they just showed up because they’re human beings with big, beautiful hearts. An upholsterer, a sustainable condom maker, a publicist, a movie producer, an artist, a plumber, a photographer, a social worker and hundreds of volunteers. As a combined force we were able action an immediate plan to feed flood victims in the absence of government food relief. Our recovery efforts will be ongoing as we now face the grim reality of increased poverty, homelessness and despair in our region. I’m confident that if this all happened again tomorrow, our community would again risk their lives to save others.” – Pip Sumbak

Pip, Wal and the team have answered every call to try and meet every need (many of which have been met). But it is now abundantly clear, however, that their limitations as civilians have been surpassed.

They are untrained in disaster relief, and the need for professionals and a federal response to this flooding, historic in our nation’s recent history, is paramount.

At the moment, with the Go Fund Me money Wal and Pip are supplying fresh food and meat from local businesses to community hubs in the Northern Rivers that have been set up for those left  homeless and displaced since the floods.

Small towns in NSW have been cut off from emergency services for over 2 weeks after being hit by extreme landslides. Hundreds of trees and mud cover roads. Entire towns are submerged in water. Residents are trapped. They have no food, water or fuel, and have resorted to using UHF radios to communicate. The intense rain continues to fall, roads are rivers, hillsides are landslides, bridges are broken, trees are blocking paths, entire towns are flooded, homes destroyed beyond repair, and people like you and me have lost everything. From clean-ups, to meals, to accommodation and emotional support – the Northern Rivers communities have delivered during the flood crisis. Whether it was providing shelter, joining the relief effort or even inventing tools for recovery, ordinary people have again stepped up in the face of a natural disaster, putting the community welfare at the forefront of their work.

With no formal training or support, the entire community has come together and an army of volunteers are working around-the-clock. After the initial crisis, recovery from a severe weather event takes weeks, months and, often, years. It is in this time that people who have lived through the natural disaster are most in need of support.

Trauma lingers long after the clean-up is over. The community does not want to be forgotten, they have to go back to work, they need help. But with thousands displaced, more to be evacuated and authorities still wading through the wreckage, much more will need to be done in the coming days, months and years.