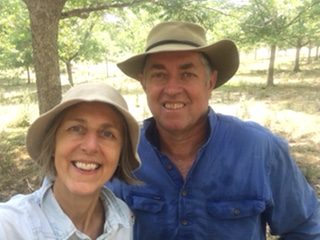 Frank Boyle, a fourth generation farmer, has lived on the property Marlivale in Goolmanger all his life, when it was originally a dairy farm.

After deregulation of the dairy industry, he and wife Andrea decided to keep farming but were looking for an alternative to dairy. Wile many farmers in the region were moving to macadamias, Frank and Andrea decided on pecans, as where they are located they had frosts and their existing beef cattle complemented a pecan orchard (once pecan trees are 5-6 years old they can happily co-exist with cows as they are no longer able to reach them).

Starting off with 20 trees the Boyle’s now have 1500. They initially began selling their kernels and nuts in shell to wholesalers but quickly realised this wouldn’t be financially viable and so once the Farmers Market movement began in the region this was where they sold their product.

The customers went crazy for their pecans and because this was so encouraging, Frank and Andrea figured they must be doing something right and were motivated to expand the business.

They began looking into different products and while Frank was working as an Ag Assistant at Woodlawn, he travelled to a Field Day in the Riverina where people were looking for an area with high rainfall to grow rice. Thinking this would be a great project for his students to be involved in he then discovered that growing rice wasn’t too different to the other cropping he was practising on his farm with soybeans and corn and so brown rice crops were planted.

The first time Frank bought along locally-grown brown rice to his market stall he sold 50 kilos in 30 minutes, such was the appetite for locally-produced grains. “People are really passionate about eating local food in this region, there are many that want to do their whole shop at the Farmer Markets and because locally-grown rice is such a small industry up here, it’s incredibly popular”. They now produce many value-added products including rice cakes, crumbs and pecan muesli and spreads.

Buying rice in a supermarket means you will have fumigated, treated rice that could be up to four years old.

Frank and Andrea’s youngest daughter Sophie and her husband Mac are now working on the farm and are keen to take it to the next level and broaden their customer base. “I feel most proud when I can see the next generation is keen to continue farming and producing food on this property”.

Like many farmers in Shire, Nimbin Valley Pecans and Rice run their farm with sustainable practices. They look after their soil and their land and they don’t ship their products all around the world. The Boyle’s sell all of their products locally – within 50km of where they live.

You can purchase Nimbin Valley Pecans and Rice through your local Farmers Market including New Brighton, Ballina, Byron, Mullumbimby and Lismore. As an essential service all are still operating. Say hello to Frank, he loves attending the Markets and meeting customers one on one, “to me it’s my mental health day”.